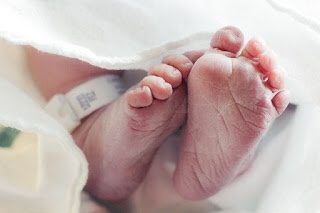 It seems like just yesterday, rather than 6 months ago, my husband and I were driving to the hospital on a rainy Friday nervous and excited to meet our little one. While some women may be in labour at this point, I was not. I had been called that morning, around 5 AM, into the hospital for my scheduled induction. I was a week past my due date and had only experienced infrequent Braxton Hicks that whole week. Needless to say, I was anxious and frustrated already that my body was not naturally going into labour as I had imagined in my head.

It is unknown what chain of events need to happen for women to go into labour. It is most likely a combination of fetal and maternal factors, but what that combination is, no one truly knows.

A full term pregnancy is considered 40 weeks, but it can be normal to be pregnant for 42 weeks. After that time, the likelihood of having a stillbirth is higher. Because of this reason, most OB’s and midwives want you to have your baby before that time. That being said, the guidelines differ between countries and in some places, women frequently go past 42 weeks before being induced. It is common consensus in North America though, to induce around 41 weeks which reduces the risk of stillbirth significantly.

From the beginning, I knew that my son’s birth was not going to go as I had planned. Around 7 AM we checked ourselves into the hospital and were assigned our room and lovely nurses. I was so pleased to be given two nurses that day since one was on training. This gave me such comfort!

It’s common for nurses to be paired up, either because they are being trained to a new job or they are students in nursing school. Many women like having another nurse caring for them, but others prefer not to have any students. It’s your choice! If you are uncomfortable having students taking care of you, let your nurse know and you should be assigned to another caregiver.

Now, one of my biggest fears about being induced was being put on the drug, Pitocin. My main reason was that this drug was known to enable stronger contractions at a much faster rate for a long period of time. I tried to calm my nerves as my OBGYN explained to me that she would frequently check on me and come back around 10 AM to break my water. Luckily for me, I was already at 3 CM when I checked into the hospital so I had hopes my labour would not be too long.

Athena is correct, often times Pitocin (which is a trade name for the drug oxytocin, you might hear it refered to as Pit) causes stronger more consistent contractions that can be harder to cope with. I believe the main reason for this is because when your body releases natural oxytocin is does it in pulses. When you get it through an IV it is a more consistent amount. So, instead of having some easy contractions and some hard, as it is with natural labour, you’ll have more consistently strong contractions.

The fact that Athena was 3 cm dilated before her induction started is great! This means her body was already starting the process and her cervix was “ripe”.

See Babytalk’s post on Inductions for more information on what a ripe cervix is!

What a Rollercoaster! The Induction Begins

For the first few hours, after I was put on Pitocin, I thought to myself, “come on how bad can this be?”. I was starting to think that maybe all the hype about this drug was just talk. Then my OBGYN broke my water and I was explained that contractions would really start to pick up now. And boy was she right! For the next 13 hours, the contractions increased in pain and I finally understood the strong, consistent contractions that came with being on this drug. Luckily, one of my nurses used to be a doula so she helped my husband support me with different techniques to labour and avoid an epidural as long as possible.

Usually oxytocin isn’t as effective when your waters are still intact, of course, every woman will experience the pain a bit differently, but once the bag of water around your baby has been “popped” there is less cushioning around the baby and the uterus is able to contract more efficiently.

It’s so great that Athena got good supportive care during her labour. Most L&D nurses are trained to give supportive labour care, much like a doula.

Going into my labour, I wasn’t sure if I wanted an epidural or not. I wanted to see how it went. I decided that I wanted to make it to at least 5 CM before I needed additional coverage for pain relief. By that time, around the 9-hour mark, I requested the epidural. The contractions were coming on so fast and strong it seemed unbearable. This was where I felt a little frustrated I was being induced in the first place. However, I realized I needed to breathe deeply and calmly in order to provide oxygen to my baby. One blessing through my labour and delivery was that my son’s heartbeat was very steady since I kept taking calm breathes and avoid hyperventilation.

Breathing is probably one of the most important things you can do during labour! Practice while you are pregnant, long before you are in labour, so that you are well prepared. Even if you have opted to get a epidural, you might not get it right when you wanted and you’ll be happy to have some tricks up your sleeve to cope with the pain.

Practice taking long inhales through your mouth and then breathe even slower out of your nose. It can help to count while breathing. Try to make your exhale twice as long as you inhale. If it takes you 4 counts to breathe in fully, try to count to 8 while exhaling. Practice this for about 10 minutes a day up until your delivery. Not only will this relax you during your pregnancy, you’ll be better prepared to deal with your contractions during labour!

Epidural – Not Always a Walk on a Cloud

Once I received the epidural, I was around 10 hours into labour and I noticed something was off. My right leg was numb and yet my left side I felt excruciating pain. I asked my nurses if that was normal and it was not. Unfortunately, my epidural provided pain relief on my right side for only a short period of time before it really just wore off. My husband and I were disappointed, to say the least, yet I knew right then and there I just needed to move forward and keep as calm as possible.

Unfortunately, this is more common than you would think. Medicine isn’t perfect, and sometimes the epidural is “patchy” and only works on part of your body. This is also dependant on how your baby is facing in some cases.

Read more about Interventions in labour, including the epidural right here on Babytalk!: Interventions During Your Labour and Delivery

Not going to sugarcoat it, I was in pain, and quite upset my pain relief wasn’t working as well as it could have, yet I tried to stay hydrated and keep calm.

The Home Stretch, You Can Do It, Athena!

For the last six hours of labour, I was given medicine to help my blood pressure since it had started dropping since I was put on Pitocin. Normally, I have low blood pressure in the first place, so I had been told this may happen. The side effects for me on these medications were not too drastic. Towards the end, I felt a little queasy. What helped was grabbing the upper corner of my left ear lobe which is a pressure point that relieves nausea.

It’s very normal to be nauseous and even vomit towards the end of you labour. In my experience about 98% of women do. Your body is doing SO MUCH!

When it came time to push, it was about an hour and a half until our sweet baby boy was born at 2:50 AM in the morning. He weighed 9 lbs 10.2 oz and was 23 inches long! We were shocked as we had been told that he would only be around the 8 lb. mark. His size definitely attributed to my long labour of 16 hours since his head was in the right side of my pelvis and was pretty snug. Those sixteen hours were well worth the wait as I will never forget holding him in my arms for the very first time beaming with pride.

For first time moms, it is totally normal to push for up to 2 hours, sometimes even more! Women are usually shocked when I tell them this. Pushing is a ton of work, but many women claim that it’s a satisfying feeling to get to that stage. They feel like they are finally “doing something”.

Athena’s little boy really wasn’t that little! Ultrasounds really aren’t so great at estimating fetal weight. I’ve been told that ultrasounds can be off by up to 2 lbs in each direction! That’s why scheduling a c-section for a “big baby” isn’t a valid reason. We don’t really know how big your baby is! Also, what’s big for you might not be big for another woman. There really is no way of knowing this before going into labour.

Overall, while I really did not want to be induced, I was grateful to deliver such a healthy baby boy. Listening to the advice of my caretakers and choosing the elective induction rather than waiting even longer would have most likely caused more harm to me rather than good due to his size and weight.

Even though she was induced, it sounds like her body and baby were ready. She had a very successful induction, even though by the sounds of it, pretty painful at times!

Thanks so much for sharing your story with us Athena. If you’d like to learn more about her, check out her blog and social media, posted below!

Bio: Hi I’m Athena. I’m a mom to a sweet baby boy, happy wife, and lover of the outdoors. I blog about all things motherhood, lifestyle hacks, and travel at Little Mountain Mommy. I truly enjoy sharing my stories and encouraging you to live your best life! When I’m not blogging with a warm cup of coffee in hand you can usually find me on my next mommy and me adventure with my husband and little one exploring the mountains of Idaho which we call home.